Are You Limiting Your SELF ? 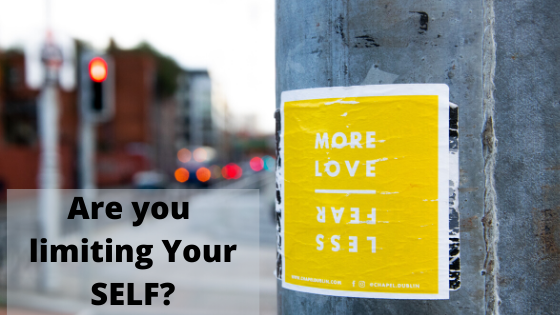 Whilst I was undergoing my EFT (emotional freedom technique) training with Karl Dawson in Brighton, it was here I learnt about Limiting belief or decision and how they are formed. They are formed between the ages of 0 to 7 years old. So Babies from the ages of zero to two are mostly in a delta brain wave state which is the lowest EEG frequency range. Children go into the theta brain wave state from the age of two to six. Why is this important to know you may ask? I will explain in more detail later but for now both delta and theta brainwaves are what we class as a hypnotic state and explains why children learn so much in this period and why they are referred to as human sponges, as they take in a large amount of information from nursery, television, books but also by watching, observing and learning from their parents, grandparent and caregivers. And so our Children learn by example. It’s at this precious time they not only learn how to crawl, walk and talk but they also learn about the danger and what is dangerous in the world. They do not have the maturity or wisdom to fully understand the bigger picture in challenging, threatening situations or times when they feel unsafe.
So these beliefs then map out our lives and they limit us.
So we may have taken on a belief that we ARE NOT GOOD ENOUGH (this is a biggie for so many people )due to a teacher repeating words such as you are stupid, you are lazy, You Don’t Try Hard Enough, you will never amount to anything.

NLP TRAINING
I fell in love with learning all about the mind and so I went on to further study Neuro-linguistic programming (NLP) and they use the word limiting decisions/ limiting beliefs and describe them as something we are not born with and its usually when we do not feel safe or we feel threatened that they are formed.

Delta and Theta
Delta and theta brain frequencies define a brain state known as a hypnotic trance—the same neural state that hypnotherapists use to directly download new behaviours into the subconscious minds of their clients.
Dr Bruce Lipton talks about the difference between conscious and subconscious mind and how have old movie tape/films playing out over and over again and it doesn’t matter how often you think positive and chant positive affirmations into your life unless you work on finding the core of those beliefs your life will continue to play the same movies and attract the same sort of situations to your life..
So knowing this information about Limiting beliefs has been so impactful to my life, it’s made me realize how important this is to share with others, especially mothers, parents, caregivers, grandparents in the hope with this knowledge we can come informed, empowered and mindful of how we talk to your children especially if they are not behaving how you expect them to.

I am the first to hold my hand up and say I am a “work in progress” and our healing is never done, but this is important information that impacts those we love, and so I hope what I am sharing is beneficial will ripple out into the world in a positive way.

This site uses Akismet to reduce spam. Learn how your comment data is processed.

We use cookies to ensure that we give you the best experience on our website. If you continue to use this site we will assume that you are happy with it.Ok